On January 11th, 2019 at 9:35 p.m., exactly 11 days before my baby brother's 40th birthday cancer decided to come to the party uninvited. It would be the first time in my life that I would see my mother, the strongest person I know, collapse in utter disbelief. He had a cough he couldn't shake, his doctor sent him for some blood work at lunchtime, by dinnertime his platelets were 7,000 and his Dr. said he should go to the hospital for some tests, and by bedtime we were transporting him to The James Cancer Hospital and Solove Research Institute.

Leukemia joined our family and changed my brother's journey forever. The James became his home for the next month as he began a clinical trial that we hoped would give him and us more time together, because as we would learn in less than a day that time and love are really the only things in life that truly matter. We learned more about chemo, IV's, medicines I never heard of before, that leukemia has more than one type.

My brother has B-cell ALL. The Nurses, Pca's and doctors began to feel like family members. We took shifts so he would never be alone. My family has always loved each other fiercely, but we learned what true love and sacrifice are all about. We bonded with other families and put them in our prayers, and held out for hope despite the odds, despite the percentages, despite the reality that there are no guarantees with Leukemia. We could not believe how many people were going through the same journey that my brother was facing.

The first round of chemo was rough, the second round was brutal. He lost 155 pounds total. After his second round of chemo we went out to celebrate his freedom. He was so excited to eat that he ordered three meals and the smallest things in life started to feel like the biggest. I remember thanking God for this simple moment with my family. Soon after we was blessed to learn that our sister was a perfect match to be his bone marrow donor. One day after her 47th birthday-- she would give our brother a chance to have more time.

Anyone who has been on this journey knows we set small goals to make the large goals seem attainable. I am so proud of my brother’s determination, proud of his strength to face the uncertainty of cancer, proud to be on his team. As we walk through life this could be anyone's story. For us "Team Hatfield -losing isn't an option" is our motivation.

Our wish is that someday everyone will win the fight against cancer. 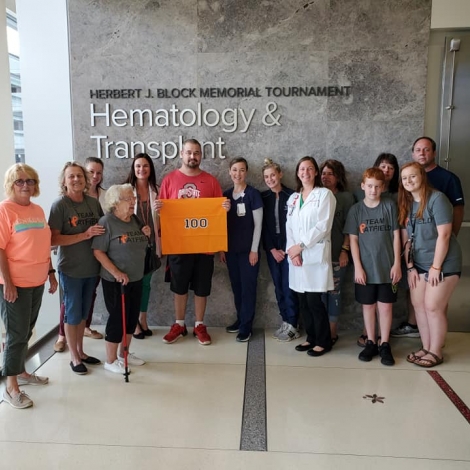