I am currently on the Board of Trustees for The Leukemia & Lymphoma Society's Minnesota chapter. The reason why I decided to dedicate my time, talents and networks to this organization is because I am passionate about finding a cure for cancer. This passion runs so deep in me, it serves as a constant reminder of how fleeting life can be. And, that everyone deserves a lifetime.

In 2012, my life changed. After a month of unknowns, surfacing fears and hope, everything came crashing down when we received the news that my 35-year-old (otherwise healthy) husband, Adam, had acute myeloid leukemia (AML). Beyond the fact that he was now a person with cancer, the lengthy and solitary treatment plan, the low survival rate, and the impact this would have on our family was almost more than we could bear. I don’t think I stopped crying for three days. That was until his first day in treatment. That was the day I grew stronger and knew that my role was to be the rock. My husband and I actually switched places at that moment. He was scared, he felt alone and was fighting his mortality.He needed me.

In those early days, I just remember focusing on one number – a 25% survival rate. How is that even possible in 2012? I thought most survival rates had reached the 60 or 70 percent ranges! It was the lowest survival rate I had ever seen. Now I know there are diseases that are often times lower. However, my reaction turned from incredulity to negativity. How can he beat the odds? This is just such an uphill battle.

I have found that most people are like me: They are aghast at the survival rate, when I tell them. Most don’t really know what to say, because what can you say, besides "that sucks."  I want to see this survival rate double, triple and quadruple.

We are grateful every day that the chemotherapy treatment Adam received has been enough to keep him in remission for two and a half years. It was a not an easy road. He was in and out of the hospital for treatments and infections (one life threatening) while trying to raise a spirited 2-year-old daughter.  We are also grateful, for without the treatment and remission, we would not have our spunky son, who is now 15 months old.

We count our blessings and want more AML patients to be able to count theirs into their old age! 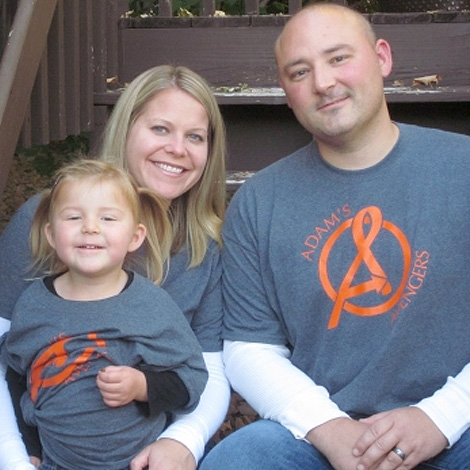